Over the last year, I have been beset by a variety of electrical gremlins. Having had the car running, I set about removing any extra wires from the loom - carefully labelling all of the earth wires beforehand. Some (many) months later when I got round to some more work, I connected the battery......and nothing! A frustrating few months ensued - I never seemed to find the time to have a good go at sorting it - not helped by a bathroom renovation at home! Finally I got to the point where the only solution seemed to be to sell it, or set fire to it...!!! Fortunately common sense ensued and I finally found the time for a systematic and thorough review of what the issue was. Eventually I traced it to nothing more complicated than a dodgy connection on one of the relays!!! Grrrr!!! So now on to something resembling progress! A quiet period at work has allowed me a run on the electrics. I purchased a load of waterproof connectors from ebay (where else!) and have spent a couple of weeks rewiring the dashboard. All the required lights work, although I had to ditch the Ford Fog light switch - I just couldn't make it work, even with a replacement switch! Instead I got a cheap aftermarket one from a local autofactors that includes a build in tell tale light. A bit of carbon vinyl for good measure and hey presto!!! Other progress amounts to buying and installing a new horn (loud!), recalibrating the fuel gauge by bending the float arm - it now reads 100% until the tank is about 2/3rds full, then rushes down to read zero when empty. Not ideal but far simpler than the electronic correction boxes you can buy! I also removed a hefty chunk from the engine loom be shortening the loom to the fuel injectors - more waterproof connectors used!! 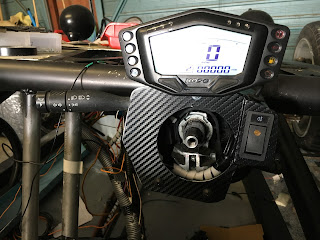 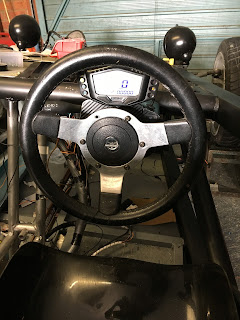 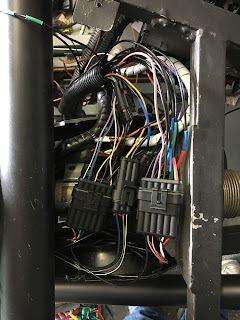 Just a quick picture to show what the car looks like now. I am considering selling the project so if you are interested please get in touch. Clearly a lack of time to make any progress has caused me to stall! 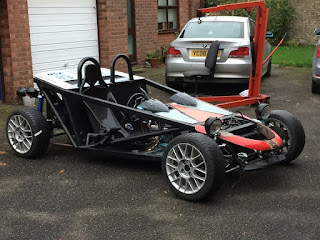 So, since the last post, what has been going on? My plan had been to paint the car by hand, using flag silver paint from tools direct. I began by prepping the chassis, which took ages, mainly because of the large amount of light surface rust that had accumulated over the years. In some places, the only thing to do was to apply Jenolite as it was impossible to get into some of the angles with sandpaper. I began painting the engine bay and quickly discovered that the finish using the silver paint I had bought was disappointing to say the least. After a lot of angst, I eventually reverted to rattle cans to spray the chassis. I used the Wickes equivalent of Smoothrite and initially I was really pleased with the results. However, after a while, I noticed that when I touched the chassis, I was finding a silver residue on my fingers. Whether this was a result of the temperature whilst I sprayed, I don't know. Fortunately I had an old can of clear lacquer in the garage. First tests were not encouraging, but I eventually found that if I applied it in very light coats, the results were good. However, by this time, I had run out of lacquer...... 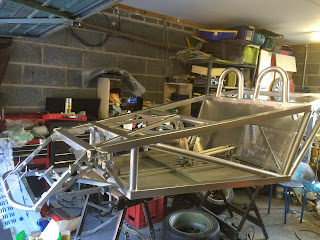 Parallel to this activity, I was quite busy at work and also managed to bring back a decent dose of 'air conditioning flu' which wiped me out whenever I had a day free! However, with the paint nearing completion, my mind was turning to the final build up. The brake master cylinder that I had been using was donated by a kind locostbuilder and was of unknown condition. When I went to strip it, I found that it was completely seized and rusted up. A new one was bought from Huddersfield Mini Spares for the princely sum of £39.99! Also of concern at the front of the car was the steering link. The Sierra link that I had used a rubber disc as a vibration damper. When I designed the rack geometry, I incorporated some offsets to allow impact resistance, however, this meant that the rubber disc was rotating at an angle, acting like a universal joint. I wasn't happy with this and so looked at the options. To buy a new triangular link UJ, splined shaft and 'Group 4' UJ was going to cost the best part of £100! The Sierra downlink that I had was a '2 piece' version and I discovered that there was also a single piece variant. Also, in my stock of useful bits, I had a TR7 steering shaft with the correct splined UJ on the end. The shaft itself was slightly bent, so no real use. I also had some offcuts of CDS tube left over from making the rear wishbones. Having bought a single piece down link, I cut it down to length, along with the TR7 link and made a sleeve from the CDS tube. I welded this at the ends, but also drilled to to allow me to plug weld alone the shaft for extra safety. Whilst doing this, I was very conscious of the heat damaging the UJs. As I welded, the UJ was resting on a water soaked sponge and wrapped in water soaked blue roll. Clearly mixing water and electricity is not ideal, so if you choose to copy me, BEWARE!!!!!!! However, I survived and, most importantly, so did the UJs! All they need now is a clean up and a coat of paint!! 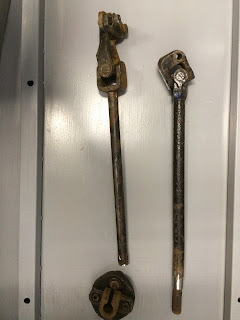 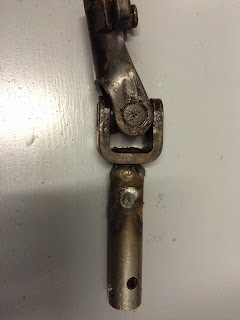 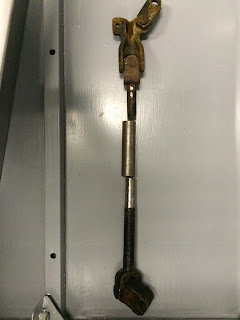 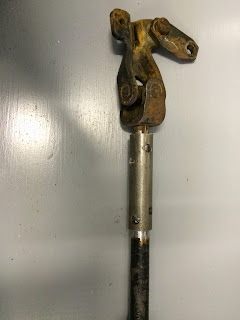 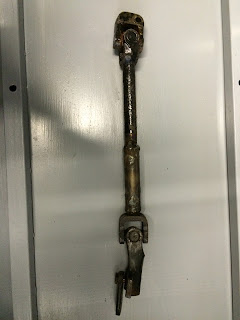 So, no updates for months, then 2 in a day! I wanted to break the blog down into subject areas to make it easier to read, rather than 1 enormous post. Thats my excuse and I'm sticking to it!! Once I had made the front brake hose brackets, I then turned my attention to the raft of the small jobs that needed fixing. I started at the front and worked backwards attaching various brackets, the catches for the fuel tank cover and the tubes for the brake cables where they travel through the rear bulkhead. I then stripped the chassis entirely and raised it to a good working height in the garage. 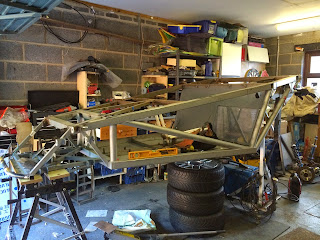 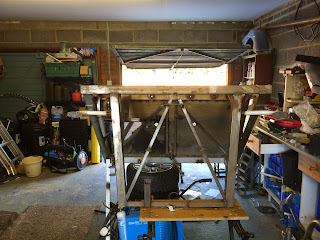 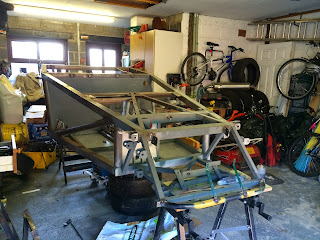 With a fresh gas cylinder from Easi Weld, I then moved from front to back completing any tacked joints and grinding out and re-welding some that I wasn't happy with. There are still a few that could be better, but it is impossible to remove the old welds so I shall have to leave these in as a demonstration of how my welding has improved..... At this point, seasonal festivities took over and there was a break of a few weeks. Once I got back though, it was down to the onerous task of removing the inevitable surface rust and preparing for paint. I had some 'Baufix' paint from Aldi that I planned to use - it advertised itself as straight to metal. When I bought it I thought it was silver, but in fact it was silver-grey, so I planned to use it for the floor and bulkheads only. The floor had previously been primed and painted and the Baufix paint went on well, leaving a nice finish. 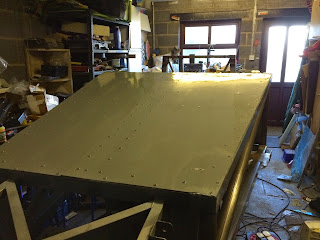 However, on the unpainted bulkhead, it was a pig! Too little and it didn't cover properly, a little heavier and it ran!! The end result probably won't be too visible but I may yet sand it back and start again! 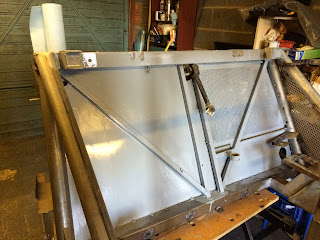 This caused me to rethink my plan to brush paint the entire chassis - my feeling had been that spray cans would be too wasteful. However, a trip to Wickes led me to the purchase of some cans of their smooth rite equivalent at a bargain £8 a can! First efforts with it are encouraging - photos to follow!
Posted by JC at 7:52 PM No comments:

So, months have passed once more between posts. However, aside from the inevitable break over christians, for once it is not due to a lack of activity, merely inattentiveness on my part. Note to self, must try harder. Following the progress made on the rear of the car, I wanted to finish the bracketry at the front, particularly the bracket for the flexible brake pipes. The pipes themselves were another bargain, this time courtesy of a fellow Locostbuilder, and were brand new (supplied by Russ Bosst of Furore Cars originally). I had assembled the driver side upright, hub and caliper many months previously but had never got around to the passenger side. The components were supplied by a company called Ellistons, who have long since disappeared, and were fully reconditioned. The problem arose when I came to fit the caliber to the upright - it wouldn't! It was impossible to get the caliper mounts onto the lugs as the pad holders fouled on the disk. 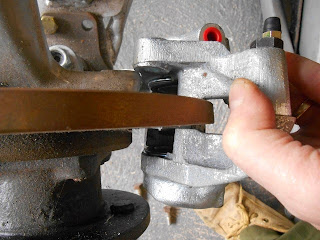 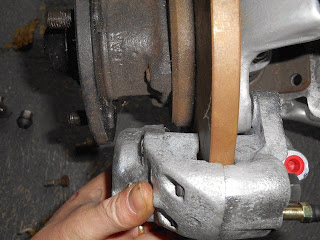 At first, it seemed that the calipers themselves might be at fault as when I compared the two, they looked different. However, they were bagged, sealed with a QC label and I couldn't work out how they could be 'incorrect'. I had an offer of buying some other callipers, again from a fellow locostbuilder, but before parting with cash, I decided to check everything. I took some photos of the uprights and compared them to technical drawings from the web using 'onion skinning' - overlaying the photos. I then took 'accurate' measurements from my upright and my suspicions were confirmed. The spindle on the drivers side upright had an inclination of 0.3 degrees. The opposite one was 1.1 degree - not a lot but enough to make the caliper not fit. 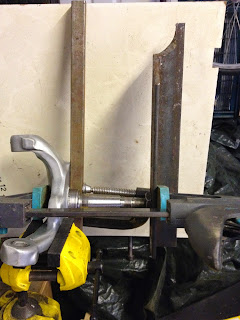 I began the search for a replacement. Some of the prices were outrageous!! On the way, I spoke to Stuart Mills of MEV who, as well as suggesting I heat it whereupon it would relax back to shape, said that he had heard that Stock Car drivers bent some uprights to get better cornering. I also spoke to Anthony from Autotune, who said that he had had a batch where one side was bent also. Mystery solved!! Anyway, I eventually sourced a new upright via a cortina enthusiasts website. I was feeling rather forlorn as my 'bent' one was beautifully powder coated, and I was left with this: However, nothing that a little elbow grease, straight to rust primer and metal paint wouldn't cure! (Photo to follow)
Posted by JC at 7:32 PM No comments:

One of the disadvantages of using the VW rear calliper is that the port for the flexi-hose points rearwards.As this would clash with the driveshaft, and leave a convoluted path for the brake lines to follow, I set about solving this today. Eventually the solution was quite simple, inspired by the cortina brake bracket! I made a small aluminium bracket from some parts salvaged from a scrap bin. 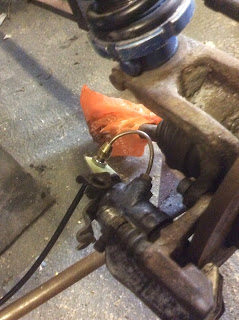 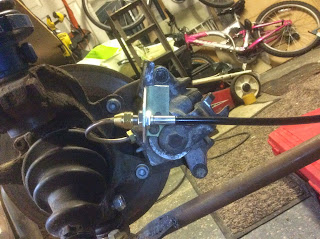 This is attached to the calliper using one of the screws already present. I then made a section of solid pipe from the calliper to the bracket. The flex bolts to the other side and then runs forward along the suspension arm. Simples! All I need now is a small pipe bender to make the job a bit neater!
Posted by JC at 2:45 PM No comments: